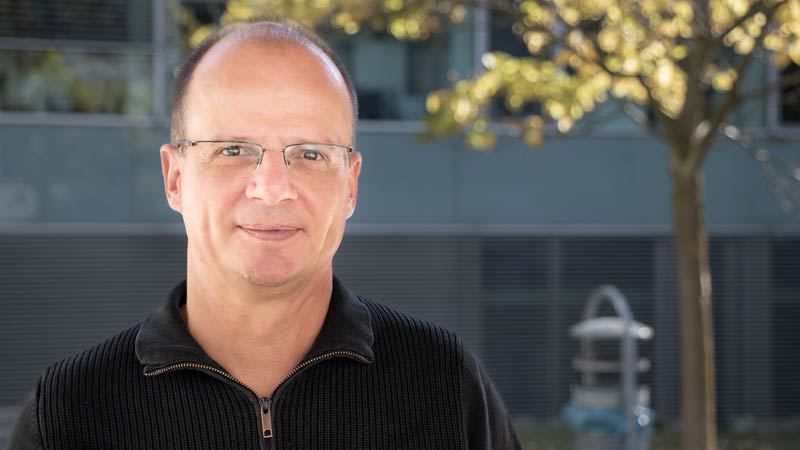 My lab is interested in studying molecular- and cell biological aspects of the retroviral replication strategy and the development retroviral vector systems and their potential application for gene transfer. The current research interests of our lab are, (1) the analysis of viral and cellular protein interactions involved in retroviral replication, (2) the functional analysis of viral glycoproteins and their role for entry and particle release processes, and (3) the development and application of retroviral vector systems for gene transfer into different target tissues.

Recently, we unraveled unique features of the FV capsid protein biosynthesis that leads to a transient nuclear localization of the protein. Currently we are investigating specific interactions of the FV capsid protein with host cell proteins and their importance for viral replication with a special focus on processes of capsid assembly and disassembly. Furthermore, we are interested in elucidating the mechanism of reverse transcription initiation of FVs that unlike other retroviruses already convert their packaged RNA genome to a large extent during virus assembly.

Structure and function of viral glycoproteins in assembly and entry processes.

For the FV glycoprotein we have discovered several unique features. For example it undergoes a highly unusual biosynthesis. Furthermore, its co-expression is essential for particle egress since the FV capsid protein lacks a membrane-targeting domain and associated with cellular membrane through a highly specific interaction with the glycoprotein. Currently we are characterizing various steps in FV assembly and entry using fluorescent protein tagged viral structural proteins and time lapse imaging involving single viral particle tracing analysis.

Our lab has developed vector systems based on different retroviruses such as the murine leukemia virus (MLV), the human immunodeficiency virus (HIV), or the prototype foamy virus (PFV). These vector systems allow for an efficient gene transfer into different cell types such as the hematopoietic lineage, leading to constitutive or regulatable expression of various therapeutic gene products. Currently we are exploiting the natural feature of different retroviruses to encapsidated and transmit non-viral RNAs to transiently genetically modify host cells. Furthermore we are characterizing the mechanisms of selective viral genome encapsidation during virus assembly and are exploring strategies to selectively manipulate these processes for gene transfer purposes.

1998–2002
Group Leader at the Institute of Virology and Immunebiology, University Würzburg, Germany

1996–1997
Postdoctoral fellow at the Institute of Virology and Immunebiology, University Würzburg, Germany