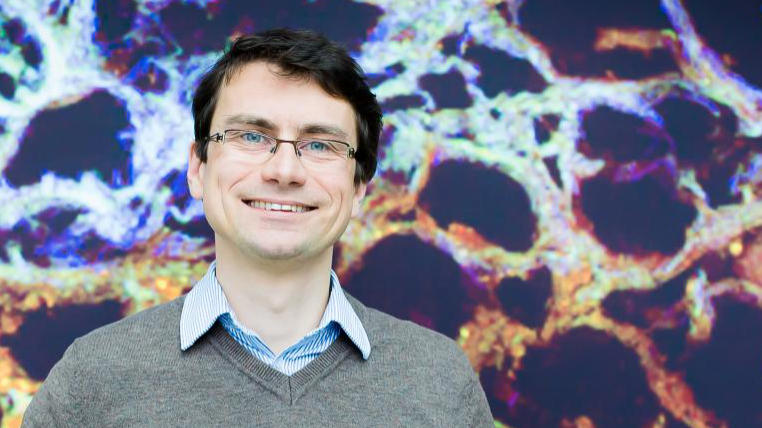 Our research group “Biological Algorithms” aims to understand the design principles that allow biological cells to move actively, sense their environment, and self-assemble functional structures bottom up, despite noise and perturbations. Topics include synchronization of cilia and flagella, navigation of biological microswimmers, as well as spontaneous pattern formation, e.g. in muscle fibers and tissues.

We pioneered a theory of chemotaxis along helical paths, which is employed by sperm cells in external fertilizers. We could characterize a unique cellular navigation strategy, which is different from bacterial run-and-tumble. During their swimming along helical paths, spatial information about the direction of a concentration gradient of signaling molecules released by the egg becomes encoded in the phase of an oscillatory concentration signal measured along the swimming path. This represents an example of stereotypic exploratory behavior in a single cell. Recently, we could show that decision making between two distinct steering mode as previously observed in experiments improves chemotactic success at physiological noise levels, thus representing an adaptation to noise in sensory information.

Additionally, we study the collective dynamics of collections of cilia and flagella. In a multi-ciliated microswimmer, Chlamydomonas, we could identify a previously unknown synchronization mechanism for pairs of flagella, which depends on mechanical self-stabilization, yet is independent of direct hydrodynamic interactions as previously proposed.

Last but not least, we proposed a first mechanism for self-organized patterns that scale with system size, thereby extending Turing's work on spontaneous pattern formation in reaction-diffusion systems. We propose that such self-scaling morphogen gradient are particularly relevant during growth and regeneration of shape-changing animals such as flatworms, which can scale their entire body plan proportionally by more than a factor of 40 in length. We collaborate with Jochen Rink (MPI CBG) on this project.

In a first project, we study hydrodynamic synchronization in cilia carpets. To understand physical mechanisms of synchronization, we develop statistical physics theory, with interactions calibrated by detailed hydrodynamic simulations. We are especially interested in the role of disorder in cilia polarity on the emergent metachronal waves, for which we collaborate with the experimental group of Nathalie Jurisch-Yaksi (NTNU, Norway).

In a second project, we investigate cell navigation at the physical limit, addressing chemotaxis of motile cells in dilute and disordered concentration gradients, for which we collaborate with U. Benjamin Kaupp (caesar, Bonn), and Timo Strünker (U Münster) using sperm chemotaxis as a model.

In a third theory-experiment collaboration, we study the architectural principles of liver tissue, with emphasis on the self-organization of transport networks therein, together with the group of Marino Zerial (MPI CBG).

In these projects, our group closely collaborates with experimental biologists abroad and in Dresden. This facilitates rapid iteration loops between theory and experiment. We pursue an integrated approach that combines mathematical modelling, computer simulations, and analysis of experimental data. A particular strength of our approach is to intercalate coarse-grained minimal models that highlight physical principles and more fine-grained simulations that allow quantitative comparison with experiment.

In addition to ongoing research, a new project will be on myofibrillogenesis. We want to understand how actin and myosin filaments, as well as crosslinkers and giant proteins such as titin spontaneously self-assemble into regular myofibrils in striated muscle cells. Mature myofibrils consists of a periodic array of contractile units termed sarcomeres, and constitute an example of an almost crystalline phase of the cytoskeleton. For this project, we team up with experimentalists Frank Schnorrer (IBDM, Marseilles) and Olivier Pourquie (HSCI, Harvard) to identify physical mechanisms of sarcomeric pattern formation and its dependence on active tension forces in a cross-disciplinary HFSP project.

as of April 2021
Heisenberg Professor for Biological Algorithms at the Cluster of Excellence Physics of Life (TUD PoL), with co-affiliation at the Center for Advancing Electronics Dresden (TUD cfaed)

2011–2016
Distinguished PKS Fellow at the Max-Planck Institute for the Physics of Complex Systems, Dresden

2005–2009
PhD in Biological Physics, Max-Planck Institute for the Physics of Complex Systems, Dresden

1999–2004
Diploma and Masters in Mathematics at Universität Leipzig and University of Cambridge, UK