Genome integrity in the mammalian germline: recombination and checkpoints during gametogenesis 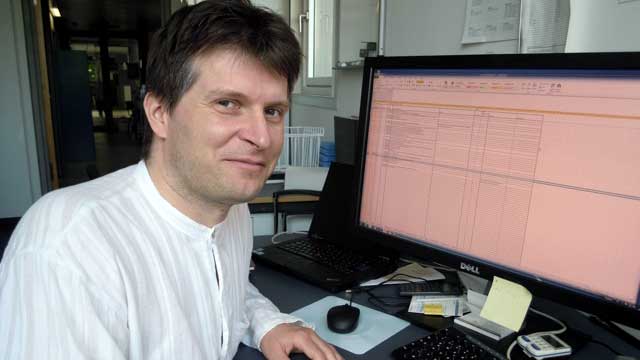 What is special about meiosis?

The main interest of the lab is meiosis in mammals (Fig 1). Meiosis and gametogenesis are among the most ancient developmental processes widespread among eukaryotes. By generating haploid gametes from diploid mother-cells, meiosis forms the basis of sexual reproduction.

Research on meiosis has very important implications. Errors in meiosis can result in abnormal chromosome numbers/aneuploidy (Down Syndrome), pregnancy loss, poor oocyte quality and infertility. An increase in the frequency of meiotic chromosome segregation defects is a key factor underlying the decline in female fertility during aging.
Despite the importance of meiosis, the molecular basis of meiotic ploidy reduction - the defining feature of meiosis - remains little understood at the molecular and mechanistic level. One main reason is that meiotic gene discovery is markedly incomplete.

Our vision is to understand the mechanisms that distinguish meiosis from mitosis and enable generation of haploid gametes. One pivotal aspect of meiotic chromosome biology and meiotic ploidy reduction is the segregation of homologous chromosomes during the first meiotic division. This requires that homologous chromosomes find each other and pair, and that each pair of homologs become physically linked via at least one crossover before cells enter the first meiotic metaphase. Besides ensuring correct chromosome segregation during the first meiotic division, crossovers create new allele combinations in gametes, thereby increasing genomic diversity, increasing the chance of creating offsprings with better phenotypic fitness, and providing the basis for faster evolution.

Crossovers are formed by meiotic recombination through a complicated multistep process, whose molecular basis and mechanism are poorly understood. Crossover formation involves an active introduction of DNA double strand breaks (DSBs) into the genome, the use of DSBs for homology search/pairing of homologous chromosomes, and the repair of a subset of DSBs as inter-homolog crossovers. Multiple fundamental questions related to crossover formation remain unanswered, which include:

To address key questions of meiotic ploidy reduction, we screen for and characterise novel meiotic proteins, focusing on proteins that are specifically involved in meiotic chromosome segregation and chromosome dynamics in mice. As part of an ongoing functional genomic screening approach, we have been using microarray analysis and next generation sequencing to identify mouse genes that are specifically expressed in meiosis, and are likely involved in aspects of chromosome biology that are required for meiotic ploidy reduction.

Our screening approach has already yielded several novel proteins that are central players in various steps of crossover formation. For example, our discovery of HORMAD1 (Fig 2) and HORMAD2, two proteins that preferentially associate with unpaired/unsynapsed meiotic chromosome cores/axes, allowed us to address how progression in meiosis is coordinated with crossover formation, and how meiotic checkpoints/quality control ensure that only those meiocytes progress in meiosis that correctly paired and synapsed their homologous chromosomes. Currently, we are focusing on the dissection of the molecular mechanisms of HORMADs and HORMAD-dependent meiotic processes, and on the functional, genetic and molecular analysis of our other identified proteins, to understand the mechanism of crossover formation and regulation in mammals.

since 2017
Professor for Genome Stability and Germline Development, Experimental Center, Medical Faculty of the TU Dresden